Old Russ can rightly be called a treasure trove for travelers. In this cozy old town between St. Petersburg and Moscow there are historical and literary museums, medieval temples and monasteries, wooden houses with mezzanines and even the oldest resort in North-West Russia. At the same time Staraya Russa continues to amaze, opening new pages of its history. 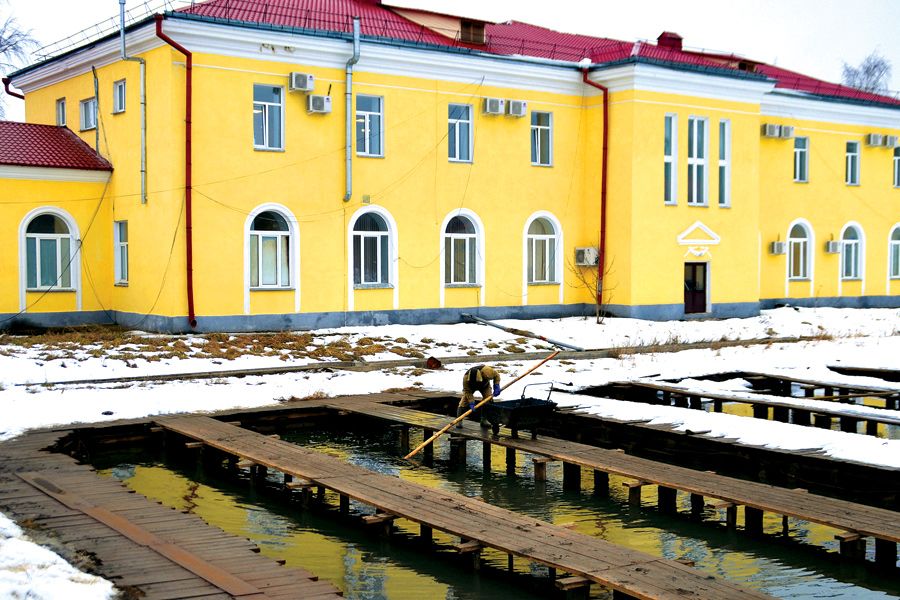 One of the main attractions of Staraya Russa rightly remains the famous resort, which appeared here two centuries ago at the site of the Peter and Paul Monastery. In the old days, people from the Russian imperial court, members of the royal family, scholars, and representatives of the creative intelligentsia came here for rehabilitation: Dobrolyubov, Mendeleev, Gorky, Stanislavsky, Komissarzhevskaya, Akhmatova. Having survived the destruction during the Great Patriotic War, the city and the resort not only revived from the ashes, but also retained the charm and caring attitude to the memory of their inhabitants and guests inherent in these places. And even nowadays during the regular modernization of the sanatorium, they continue to find new documentary evidence of past times.

“Before building new sanatoriums on the territory of the sanatorium, we carry out mandatory archaeological excavations, during which we find a lot of interesting things: seals and attributes of doctors, personal belongings of tourists, and other artifacts telling about the rich history of this place”, says CEO of the Resort Staraya Russa Nadezhda Porokhovnik.

Employees of the health center not only collect all the facts of its history, but also tell travelers and tourists about them in the form of interactive theater tours. So do not be surprised if the famous Muravyevsky fountain you suddenly meet with Nikolai Dobrolyubov himself, surrounded by women dressed in the fashion of the XIX century. They will share their "memories" of how and how the resort lived before, they will show old photos in which the fountain was still under the open-work tent of metal and glass. And as an informal guide to the resort and the city, they will advise you to use the autobiographical story of Petersburg prose writer, poet, science fiction writer Vadim Shefner, “A Name for a Bird, or Tea on a Yellow Veranda,” in which the author described his impressions of living in Staraya Russa.

“I remember being surprised at the lake from which the curative mud was taken,” Shefner writes. - & nbsp; The lake was surrounded by a wide wooden gallery for walks, and its entire water area was crossed by many wooden walkways; along these walkways, resort workers rolled their cars. With scoops on long handles - it seems like goldfish - they scooped dirt from the bottom of the lake into the cars and carried it to the mud baths. I was fascinated by the steam tram, which stopped at the entrance to the park. But I never managed to ride it: it was worth the money, and we lived very economically. "

Unfortunately, the tram does not drive today, but the dirt is mined exactly as the poet described.

Outside the gates of the resort also continue to appear new objects, replenishing the map of local attractions. So, on February 8, 2019, on the day of the 75th anniversary of the liberation of Staraya Russa from the German fascist invaders, the National Museum of Military History opened here. Its creators are enthusiasts, fighters of the Old Russian search party “Memory”. The basis of the expositions were their numerous finds. On the museum windows and stands you can see items from the Great Patriotic War: documents, letters, prints, weapons, helmets and much more. There are special things, for example, a flask of water that has not been opened since the days of hostilities. The separate stands reflect the military events in Afghanistan, the Chechen Republic, Abkhazia, as well as rescue operations in Budennovsk, Nord-Ost and Beslan.

The city administration provided room for the museum, and volunteers helped to make repairs.

Staraya Russa is most associated with the name of Dostoevsky. But few people know that this city and its environs are closely connected with the name of the great composer, pianist and conductor Sergei Rachmaninoff. Back in the 70s of XX century. Researchers in his life and work discovered in the State Archives of the Novgorod Region a metric book of the Church of Cosmas and Demian in the village of Stary Degtyar, Starorussky district for 1873. The entry in the book indicated: Sergey Vasilyevich Rakhmaninov was born in the noble estate of Semenovo, which is located in the vicinity of Staraya Russa, and not in Onega, as it was previously thought.

Section has not been found.

Section has not been found.

Do you want to get the best deals?
SUBSCRIBE TO THE NEWSLETTER